Harley’s Little Black Book has been on a winning streak even if it’s been a four month delay between the last issue and this one. But the new issue is finally out and “No Pain, No Sane” has Harley teamed up with (and pitted against) the Man of Steel himself!

Reading this was like finding a weird time capsule back to ye olden days when comic books were so completely off the wall with aliens and magic and completely loopy scenarios–and nobody questioned any of it. Amanda Conner and Jimmy Palmiotti channel those good ol’ days perfectly for artist Neal Adams who should rightfully be called one of the fathers of modern age Batman, and of the modern-age comic book overall as well. Not to mention he is the literal father of Bat-related characters as co-creator of Man-Bat and Ra’s al Ghul. With Dennis O’Neil, he also brought the Joker back from laughable obscurity.

Which makes it especially interesting to see him take on Harley Quinn–a character who wouldn’t be a twinkle in anybody’s eye for another twenty years after Adams helped revamp the whole Batworld.

Adams celebrated his 75th birthday last June and this book is a rare gift for us. Though it’s sadly lacking Batman, just seeing Adam’s art is a brightly burning bit of nostalgia for me. Adams has been doing a lot of variant covers for DC, but hadn’t seen him on interior art for a while (anybody know of other books he’s done lately?).

First of all, the premise is completely bonkers. Let’s just say that up front. Conner and Palmiotti even apologize to both O’Neil and Adams for appropriating their talents into this carnival of crazy.

So here’s the deal. Back in 1978, O’Neil and Adams created a book in which Superman is forced to fight Muhammad Ali to save Earth from the “Scrubb”.  Ironically, that book too suffered numerous delays. 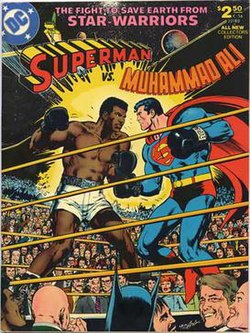 This is essentially an homage to Ali by proxy (the great heavyweight champion was one of many notable icons who died in 2016). Here, Harley stands in for the heavyweight champ and is pitted against Superman to save the world from an alien invasion.

The story features some of Harley’s cadre (like Big Tony), but also characters from Metropolis (Lois and Jimmy), and contains the usual off-color humor from this writing duo that you should expect by now. Some of that humor is weirdly extra-funny when applied to goody-two-shoes Superman (like him changing into his costume in a porta-potty). But overall it’s good fun and the book takes excellent advantage of the flashback-like tone from an earlier era when comics were simpler and the stories less concerned about things like physics, common sense, continuity, etc.

So yes, it’s ridiculous. The leader of the Scrubb takes away Superman’s powers to “even” out the odds. Of course, Harley is going to play dirty.  Guess who wins?

How is this even a contest? It’s even crazier than little green pills in Injustice!

I won’t spoil the joy of discovering the wackiness of this for yourself. It goes to show what you can get away with in a comic book if you go bold enough and have as your main protagonist someone bonkers enough to just roll with the flow. Superman doesn’t come off as a total square, but the contrast of temperaments makes them a fun duo. And even though I really wanted to see Jimmy get punched in the face and didn’t (sue me, I’ve never liked the twerp), there was plenty else to enjoy in both the character interactions and the overall action itself. Harley does punch one of the event cameramen, by the way, which is almost as good.

Adams’ work throughout, as I mentioned before gives this book a nostalgic tone.  Look for cameos (including one of Ali on the cover). Trigger-warning: there is a cameo of a certain political monkey with a toupee in this. But also, it would really improve your appreciation of this book if you’re familiar with the original story–then you can know how utterly absurd this parody is (and some of the things they do here–like zapping Pallas Athene hardly before she gets a word out).

Even if you haven’t read the book or familiarized yourself with the original story, this is still really entertaining. Yes, lots of suspension of disbelief is required, but right now, as grim as 2016 seems to be going out, it’s nice to have something light and fluffy and fun to close out the year.

Harley’s Little Black Book pays homage to “The Greatest” in this retelling of Superman vs. Muhammad Ali that recasts Harley as Ali.  Forced to fight in order to defend the planet from an imminent alien invasion by the Scrubb, Harley and the Big Blue Boy Scout put on the boxing gloves for an intergalactically televised arena match. Sounds insane? Of course it is! What else would you expect from team Harley at this point? With Neal Adams reprising his role on art, this book is nostalgia, nuts, and numbingly good fodder with which to ring in a newer (and hopefully kinder) year!