Alan Grant is a favorite among us all here at Batman News. With his passing, we wanted to talk a bit about our favorite Grant penned Batman stories. I think I speak for my fellow reviewers when I say, almost every Batman comic written by Grant are good. The vast majority are, in fact, great. If you are unfamiliar with his work, you can treat this as a greatest hits list. Do yourself a favor and give them a read!

Batman #459 “Saturday Night at the Movies”

Despite all of his strong work this is the one story that stands out to me. In many ways, it’s not a “special” comic. It has no gimmick, it’s not part of a larger story, and Grant doesn’t feature a well known member of Batman’s rogues gallery. Despite that it is one of my favorite comics ever published. This is a story that can be enjoyed with no prior knowledge of the continuity of the time. Equally, it is very rewarding within its context. Norm Breyfogle is still given a chance to draw some awesome action sequences with Batman, but at its core this is a story about Jim Gordon. A fun, rather touching story that also takes the time to say some truly valuable things. Grant expertly plays the readers’ emotions, culminating with the ironically poetic ending and leaving the reader both satisfied and desperate for more. I could go on but suffice it to say, there isn’t another Batman comic quite like this or Alan’s run(s) in general. He truly was a one of a kind talent and I will forever treasure his work on Batman, especially “Saturday Night at the Movies” which is, in my opinion, his very finest moment. 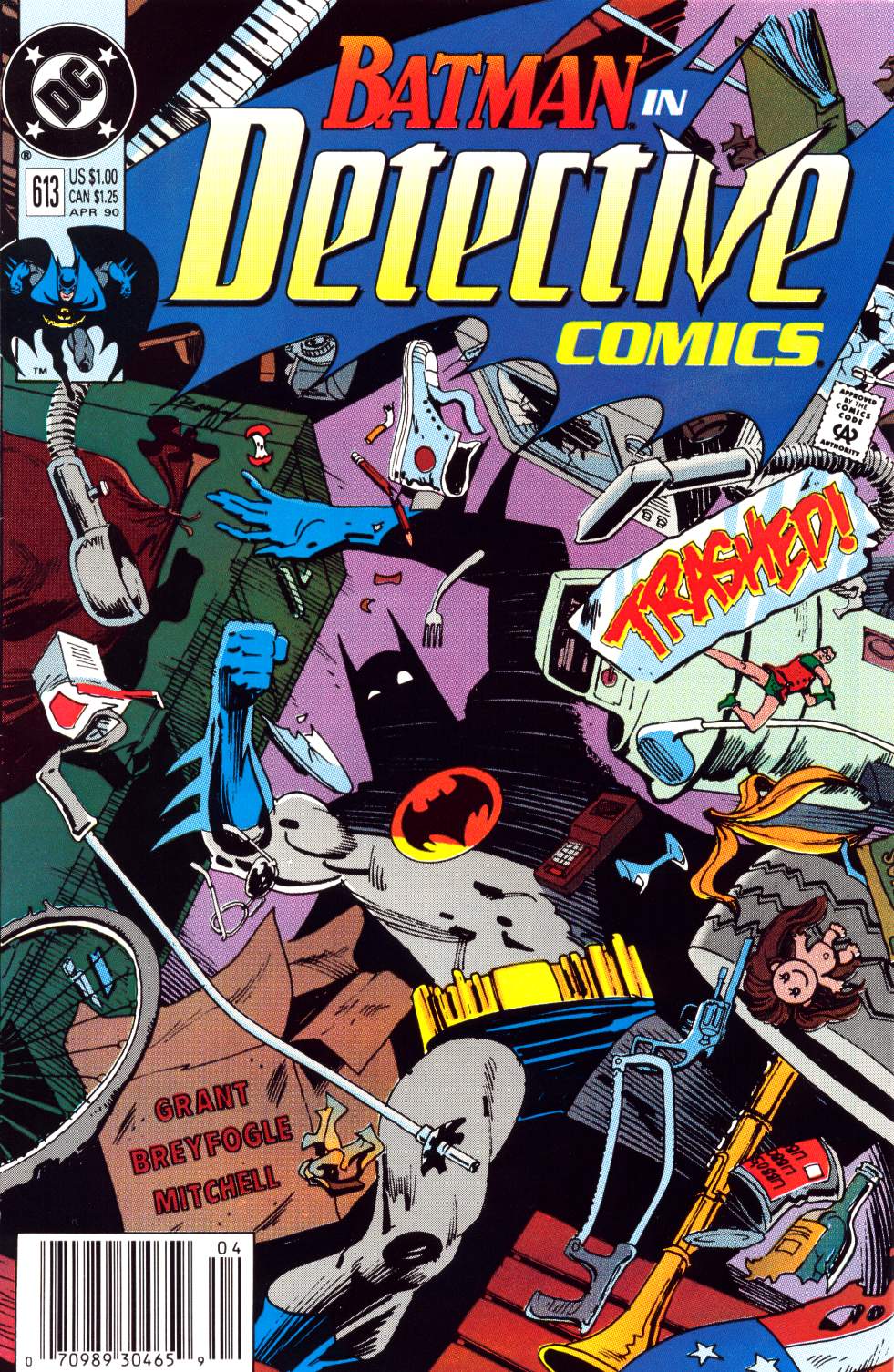 There are other Alan Grant Batman stories I could have written about, like “The Mudpack,” “Ratcatcher,” or “The Misfits.” All great arcs, and all indicative of the quality and innovation Grant brought to Gotham City.

Instead, I’m curiously drawn to “Trash,” from Detective Comics #613.  While a good story, it’s hardly my favorite from the Grant and Breyfogle team, but it is representative of Grant’s greatest strengths: a one-and-done single issue story, it pits Batman against the incorporeal threats of civic corruption and societal injustice.

To put it succinctly, Batman takes on littering.

Given that it’s an Alan Grant script, it goes deeper than that, as the Dark Knight has to fight a threat that impacts everyone, yet one to which hardly anyone pays much mind. There aren’t any flashy villains, and other than brief appearances from Vicki Vale and Alfred Pennyworth it’s bereft of any of Batman’s supporting cast too. Instead, Batman is more a co-lead or supporting player to young Mike Dell and his father Harvey, the latter of whom is a garbage man. With a conflict that Batman might not be able to win and an absolutely tragic ending, this is a gutsy, challenging story from beginning to end. As with any issue from this team, the art from Norm Breyfogle, Steve Mitchell, and Adrienne Roy demonstrated what sequential comics should look like, and Todd Klein’s lettering is wonderfully creative in its own visual storytelling.

With this era of Batman comics, and Grant and Breyfogle’s tenure in particular, I feel that you can pick up pretty much any single issue at random and get a strong Batman story.  “Trash” is one of those comics, and one that more fans should read.

When I was first getting myself acquainted with Batman, one of my favorite stories to read was Knightfall. While more common to see these days, It was the first major Batman defeat. The trilogy finished out with the return of Bruce Wayne in KnightsEnd, but hardly put the cap on the rivalry I had grown to enjoy between Batman and Bane. Until Alan Grant’s Legacy. Bane might have been beaten in Knightfall, but not by Bruce Wayne. The even score was finally settled at the climax of what I consider to be the true ending of Knightfall. Though a mostly unsung storyline, I loved the story and team-up with Ra’s al Ghul. Even if you are unfamiliar with Grant’s work in Legacy, many parts of it inspired the ending of The Dark Knight trilogy. Grant quietly secured an impressive legacy of his own, with these characters and stories hopefully continuing to live beyond him.

There’s no doubt that Alan Grant is a god among Bat-writers. He’s given us so many ideas, hell, so many characters: Ratcatcher, Jeremiah Arkham, The Ventriloquist, Victor Zsasz. But aside from Harold Allnut (bring him back, DC, you cowards!), the one that has stuck with me the most by far is Anarky. I don’t think that’s a coincidence, either, Grant was completely enamored with the character. So much so that, when DC wouldn’t let him make Lonnie the third Robin (something that’s hinted at as early as his first outing in Detective Comics #609!), he attempted to buy the rights to the character outright! Obviously, that didn’t happen, but it allowed Grant to use Anarky to explore his own political philosophies through the framework of Batman. So today, I’m remembering the creation of this uniquely personal character, because no one has done it like this since.

Honorable Mentions: Batman: Shadow of the Bat #1-4, “The Last Arkham”; Batman #448, “The Penguin Affair” for HAROLD

Killer Croc is a character that very few writers are able to get right. Most seem to use him as a mindless brute if not a literal monster. In Requiem for a Killer, Alan Grant humanizes Waylon Jones and makes you really feel for the tragedy of his situation. He’s been shunned by just about every part of society, and lashes out because he figures that no one cares about him anyways. It’s only those who have nothing that are willing to accept him for who he is (the nobility of the downtrodden is a theme Grant visits many times during his run on Batman/Detective Comics.)

The Misfits three part story in Shadow of the Bat #7-9 has two things I love in a Batman story: A good dose of Bruce Wayne in trouble and a redemption arc for a lower tier villain. It certainly helps that Tim Sale is on art duties, another bat legend taken from us too soon, and it’s a joy to see two masters of the craft working in harmony together. Grant’s writing is clear headed, unpretentious, and always displays that meat and potatoes storytelling will always stand the test of time.

Honorable mentions: Batman: Shadow of the Bat #1-4, “The Last Arkham”

Alan Grant and Norm Breyfogle’s run—starting in Detective Comics and continuing through Batman—ranks in my Top 3 favorite Batman runs of all time. From Ventriloquist and Scarface’s introduction to stories like “The Mudpack,” “Rite of Passage” and, of course, “The Last Arkham” in the pages of Shadow of the Bat, it doesn’t matter how many times I’ve read these, I’m always having a blast. But my favorite Alan Grant Batman story is not illustrated by Norm Breyfogle. I’m talking about Batman: Scottish Connection, a story that Grant wrote for the one and only Frank Quitely.

Scottish Connection is a story set in Scotland. Bruce Wayne attends a ceremony during which the remains of one of his ancestors are returned to their rightful resting place. However, Bruce notices that the gravestones have been tampered with, and this sends him on an epic detective quest. What I like so much about this comic is that it’s a mystery that keeps building on itself, layer by layer. The focus is on detective work, but we are also treated to some awesome action sequences where Quitely gets to let loose and have fun. Alfred shows off some crazy driving skills and Batman’s fight choreography is creative, anatomically perfect and every panel connects to the next in a masterful sequence. What’s more, Bruce and Alfred’s dynamic reminds me of Holmes and Watson, and the villains of this piece are delightfully wacky and funny.

It’s fun to see Batman traveling outside of Gotham, and this one is a true action adventure with an exciting core mystery. It’s a book that you can easily read in one sitting—late at night, on a rainy day, or whenever you please. It’s always a good time to read a Grant story, especially when that story is called Batman: Scottish Connection.

Rest in peace, Alan. Thank you for these amazing tales. I will cherish them forever.

So there we have it. Seven of the best Alan Grant bat-tales. Any one of these is worth a read or a reread! Now it’s your turn. Share your favorites in the comment section!

Everything coming to Paramount Plus October 2022

Don’t Worry, Darling makes its way to the top of the box office